MVP: What is the Minimum Viable Product and why should you have it?

Seeing  what people actually do with a product is much more reliable than asking what they would do. That’s why before starting with the actual product development it is useful to make a ‘Minimum Viable Product’, often abbreviated to ‘MVP’.

The term was introduced by Frank Robinson in 2001, but the concept gained popularity in 2009 after Eric Ries described it in his book ‘The Lean Startup’ as ‘that version of a new product that allows a team to gather the maximum amount of validated customer information with the least effort’. Since Agile is based on both validation and iteration of products based on user feedback, the MVP plays a central role in this methodology.

What is an MVP: types and case studies

There are many approaches and different types of MVP. In most cases, it is a version of the product with the bare minimum of functionalities, sometimes only one: the one needed to test the idea. The social network Foursquare, based on user geolocation, started out as an MVP with a single functionality, that of check-in with reward in terms of gamification. Only after validating the idea with an enthusiastic and growing user base, did the Foursquare development team start adding feedback, guides and all the other features.

The founders of Airbnb used their own flat to validate their idea and test the market for online short-term rental accommodation. Their MVP did not have the options to select multiple dates, locations or prices; targeting a specific audience (attendees at a tech conference) they created a minimalist website with photos and other details about their property and found several paying guests almost immediately.

In 2010, Uber beta version (then called ‘UberCab’) began as a simplified mobile interface used only by the founders and their friends: to gain access, one had to email one of the founders. This approach allowed Uber to start by focusing on a small user base in San Francisco and use the results to refine and improve the product iteratively.

To validate an idea one can use the piecemeal  strategy, i.e. to provide value using existing tools before building a customised solution. Groupon was validated in just this way: the MVP of the site was created with WordPress, the coupons with FileMaker and the email managed with Apple Mail. This allowed the basic idea to be validated before creating a sophisticated ad-hoc system.

When the product does not yet exist, it is also possible to make an MVP in the form of a video to gauge user interest in the idea. Dropbox did that: it created an eye-catching video with screenshots and mockups of the functionalities the software would include. The video brought hundreds of thousands of people to the website, almost overnight, and increased beta sign-ups from 5,000 to 75,000. This level of interest validated a hypothesis that DropBox engineers needed to be sure of before moving forward with a full version: was file synchronisation a problem that most people didn’t know they had?

How to define your MVP?

As we have seen, there are many different types of MVPs, but before thinking about what to create, it is useful to follow some key steps.

Define the goal of your MVP: understand what problem you are solving and for whom. The goal should be in line with your business objectives. At this stage it is useful to conduct extensive user research, e.g. through Design Thinking. Well-conducted research during product development reduces the risk of off-target ideas and helps you reach the market with a well-defined MVP that can quickly generate feedback. Only after studying a clear strategy, It is possible to evaluate which functionalities to build to test the idea.

Identify specific problems to be solved or functionalities to be tested: think about the specific functionalities your product should offer to users. Remember that in this phase you do not have to include all the functionalities you have thought of, but only the fundamental ones. Prioritise the values you can deliver in the time you have: deadlines, budget and risk can be useful goalposts to figure out which functionalities to include. Sorting through user needs and assumptions with a prioritisation framework can help you define the value and essential features for your MVP.

Develop your MVP: remember that it is not a complete and final product, but an embryonic version that contains only a few functionalities, i.e. those essential to test the main functioning and validate the idea. But beware, this doesn’t mean that MVP is an interface with half-built tools and functionalities: it is a minimal but working product that must be able to be tested by real users.

Validate your idea: test your MVP with real users. Performing usability tests helps you identify which of your assumptions are valid and which you can prioritise to build a truly innovative product. Observe how users use the product, what blocks them, what additional functionality they would like to have and, if necessary, revise the whole idea or just some product features. From the test, you can derive new opportunities and information to add further significant improvements in the next version of your product. 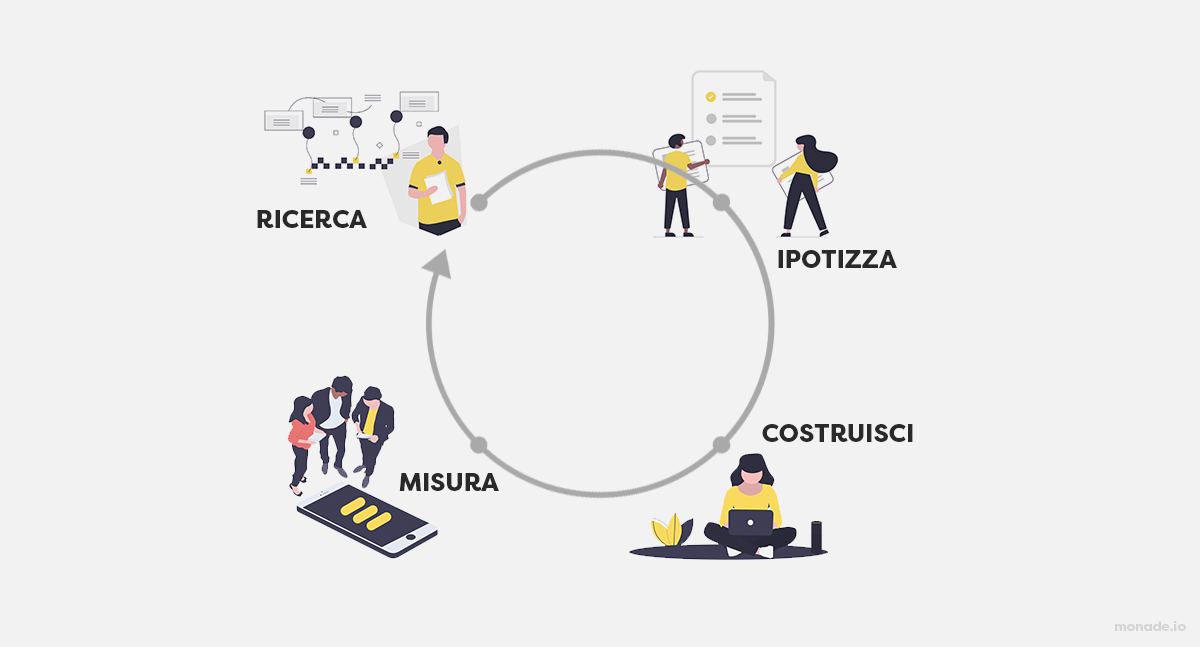 The advantages of an MVP

The main advantage of an MVP is that you can understand your customers’ interest in your product without fully developing it: you can find out whether your customers will like your product with less effort and expense. Evaluating usability and user experience in the prototype and post-launch phase allows you to test initial assumptions and formulate new ones.

A company might choose to develop and release a minimum viable product with several objectives:

The MVP acts an airbag and makes it possible to foresee the commercial and technical potential of a product vision and its implementation. It gives the opportunity to make business and technical decisions based on facts rather than assumptions and adds credibility for potential investors by demonstrating that the product is viable and saleable.

Do you have a project to develop?